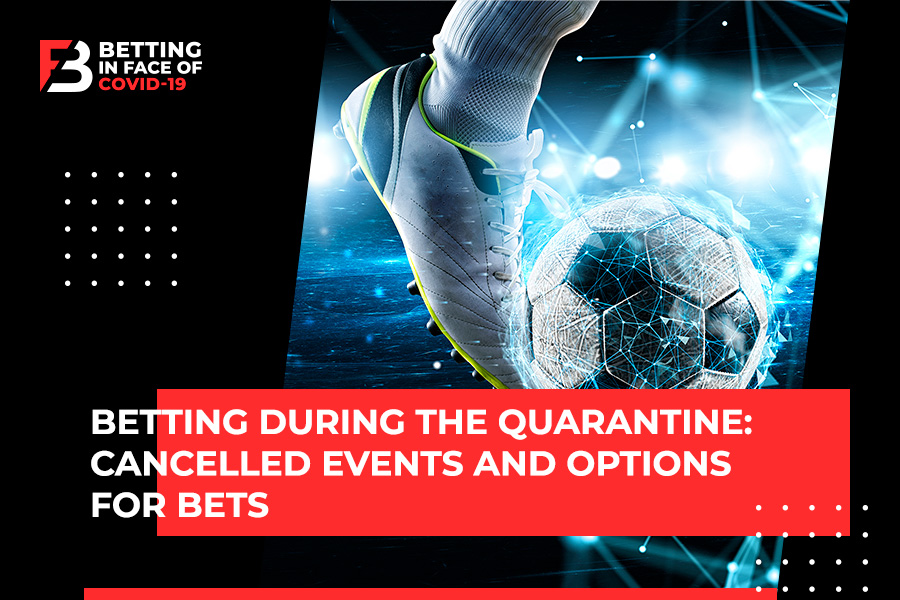 In March 2020, the amount of confirmed coronavirus infection cases increased twice and exceeded 400 thousand cases. To avoid spreading of the infection, governments all over the world implemented the restricting measures. The majority of states cancelled all public events, also announcing the quarantine. Nevertheless, betting business refused to surrender to the circumstances and is searching for new options to make the bettors happy.

What sports events have been cancelled or rescheduled?

Many bettors had doubts about rescheduling of EURO-2020 and Tokyo Olympics, some of them even placed bets. Regardless, when these events have been moved to 2021, it became obvious that we wouldn’t see the usual activity on the sports betting market this year.

And this is not the only setback for the market. All sporting events have been ceased in Italy, Spain and all major football-loving countries. Champion’s League and Europa League have been paused as well. Tennis tournaments across the globe are on hold till June. 2020 Ice Hockey World Championship was supposed to take place in Switzerland, but will be cancelled as well.

The eighth Formula 1 Grand Prix has been rescheduled in Azerbaijan, Bahrain, Vietnam, China, the Netherlands and Spain. Australia and Monaco cancelled the race. UFC Fight Night 171 featuring the main fight between Tyron Woodley and Leon Edwards has been called off as well.

The influence of pandemics has affected the American sports as well. NBA and NHL ceased all games for an indefinite term, same as the MLS soccer league.

What events are still on for betting during the quarantine?

Cancellation of sports events has caused considerable financial damage to betting shops, but they are looking for a solution for the situation, launching new betting lines for the pleasure of bettors. What events are popular nowadays?

Belarus hosts Extraleague hockey playoffs. Also, the only acting football tournament in the world is Belarusian Premier League that kicked off on March 19 despite of the global crisis. No other tournaments of the higher-rank football league are organized, although friendly games between the clubs are still going.

UFC 249 tournament with a fight between Khabib Nurmagomedov and Tony Ferguson is scheduled to April 19. Currently it’s in the top by popularity at many betting websites and is widely discussed in the media. Nevertheless, many experts think it would be cancelled as well following the situation with UFC Fight Night 171.

Chess Candidates Tournament 2020 began on March 15. It is a final stage among the tournaments for qualifying the contender to challenge Magnus Carlsen – the acting world champion in chess.

Cancellation of matches and the quarantine caused the increased demand in betting that can’t be satisfied with traditional sports. Thus, many providers prefer betting lines for esports, fantasy sports and virtual sports. They’ve come a way from the niche segment to a life saver for the betting business.

Esports is also facing damages because of the ban on public events – many LAN tournaments such as IEM Katowice have been organized without the fans or cancelled (ESL One Los Angeles etc.). Still, it suffers much less than traditional sports as its tournaments are conducted online and the majority of the audience watches them via the Internet.

The popularity of sports simulators is growing too – the audience expanded due to the fans of the traditional sports who are searching for an alternative. Most of the interest is driven to esports football, with some attention to esports basketball and tennis as well. DFS and virtual sports have a rise for the same reasons as the simulators.

Fantasy sports tournaments are usually based on the real championships (which made it harder for their organizers lately). Each participant gets an equal amount of virtual money to select a team from the real players of the competition. Points are rewarded when athletes in real matches are included in the team sheet, win or make certain actions. The participant getting the most points wins.

Virtual sports is a perfect format for betting – it can be done anytime, regardless of the real tournaments schedule. Real sports teams serve as digital models managed by the artificial intelligence. AI analyzes individual skills, stamina, injuries, physical parameters etc. To define the match results, random number generator is applied.

During the match cancellation period, attention to non-sports betting lines has increased. Some of the most interesting options offered by betting providers include:

Find out more about the best betting options during the pandemic – join Betting in face of COVID-19 online conference on April 17.

A Good Start Would Be Gathering Everyone into ESIC to Deal with Integrity Issues that Are Common to All of Esports: Ian Smith, Integrity Commissioner at ESIC

Ian Smith talks about his work as Integrity Commissioner at Esports Integrity Coalition (ESIC), the key differences between traditional spor...

How to Generate Betting Traffic Efficiently in 2020?

The high popularity of sports and the rapid development of the sportsbook market has made betting one of the most profitable and promising a...

We Are Not Able to Calculate the Damage Right Now, As It Will Depend On How the Epidemic Is Progressing: Ivan Alonso, General Manager at Club Nacional de Football

Today betting is opening huge opportunities for everyone looking to generate income. In order such activity not to become unprofitable, it’s...

How Esports Can Save Betting: Find Out From ESIC Integrity Commissioner Ian Smith at Betting in face of COVID-19

On April 17, Integrity Commissioner at Esports Integrity Coalition (ESIC) Ian Smith will make a presentation at Betting in face of COVID-19...

Coronavirus: How to Protect the Gambling Business From Pandemic

Each day, the number of COVID-19 infected people across the world is growing. Due to the measures imposed by the governments aiming to fight...